Kamishibai in the UK, Italy and Australia 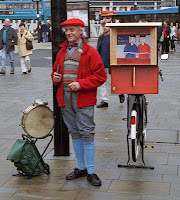 Here is some news of the international connections in my universe - happening because of Japanese kamishibai. Enjoy ...

At the top of this post is Derek Carpenter from the UK. Derek and I met .. well I don't remember how .. but it was to do with a mutual fascination in kamishibai. In particular, we both share an interest in the idea of swapping and trading stories around the world to boost our repertoire. So we set up the Kamishibai Library of Swaps. Well ... sadly we have not been inundated with folk keen to trade but we've had some fun. You can see Derek on a cold day in Newcastle in the UK with his rig and his story, The Two Brothers. And below is me in Australia on a very hot day, at the Comic Book Festival in Melbourne with the same story. Derek sent me the images as jpegs and I took them to my local printer and there they are! 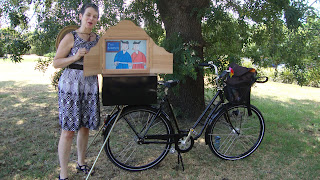 Here is Roberto Leopardi in Italy. Roberto found me via my website and emailed me some of his adventures. Roberto believes he is currently the only gaito (street) kamishibai in Italy but hopes that some other young street artists are willing to learn. After 20 years of hand puppets, he started  two years ago with the kamishibai and says, 'no puppet show can give me same satisfaction and positive response from kids...' Roberto is currently developing a story about the arrival of the potato from South America to Europe in the 16th century for a local tourist association near Bologna. 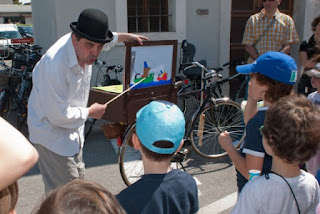